Bon Chic, bon genre or  good style, good class is an expression used in France to refer to a subculture of stylish members of the Paris upper class living on the right bank (rather than the intellectual, countercultural left Bank). The main characteristics in its style are:
polish,
good breeding,
good booming,
This smart uniform with classic luxuries items are: a cashmere sweater, kilts and twin-set, a pair of ballet pumps, an Hermès Birkin bag, and some accessories like a silk scarf,  school satchels, pearl necklaces, and  expensive watches.

BCBG is also to be known as "seizieme' after the 16th arrondissement, one of the most chic neighbourhood in Paris. This style was the symbolism of the style had its greatest power, it often looked more old-fashioned, the young dressing much like the old, with safe conservatism.
Most of the French actresses is still wearing this style, like Marion Cotillard with a polished style, clothes with perfect figure, a glamorous evening gown, and understated makeup.

The queen of BCBG style and the favourite muse of the couturier Yves Saint Laurent. 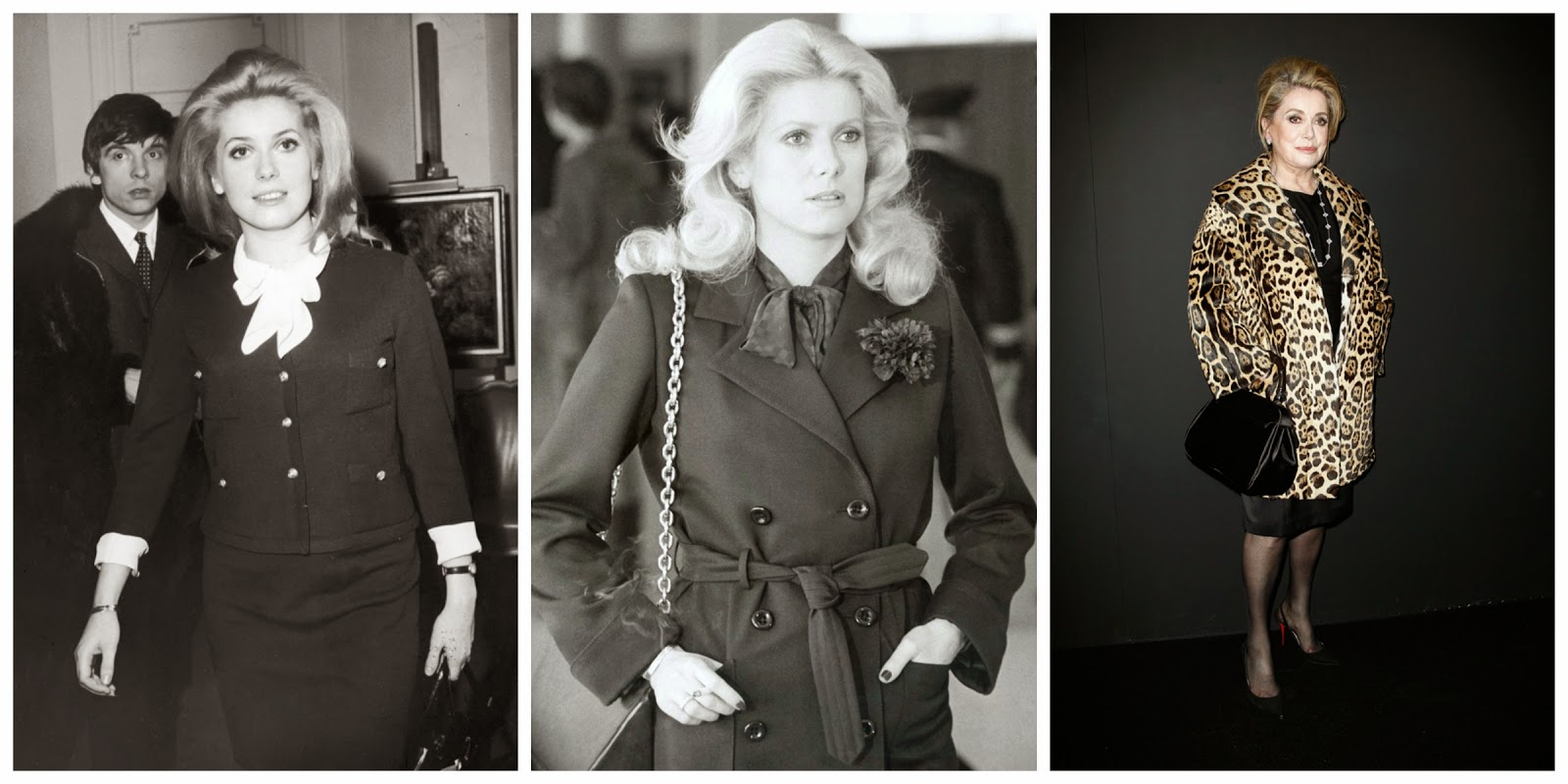 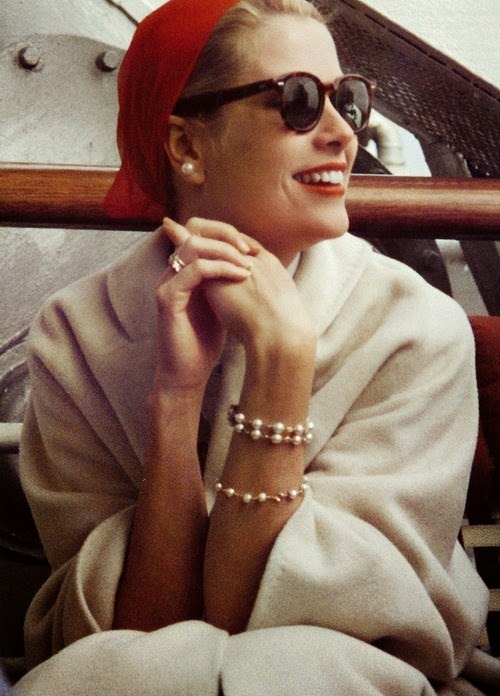 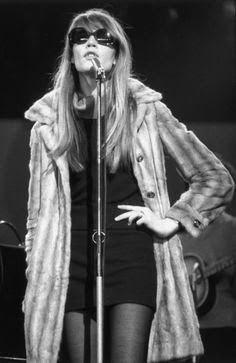 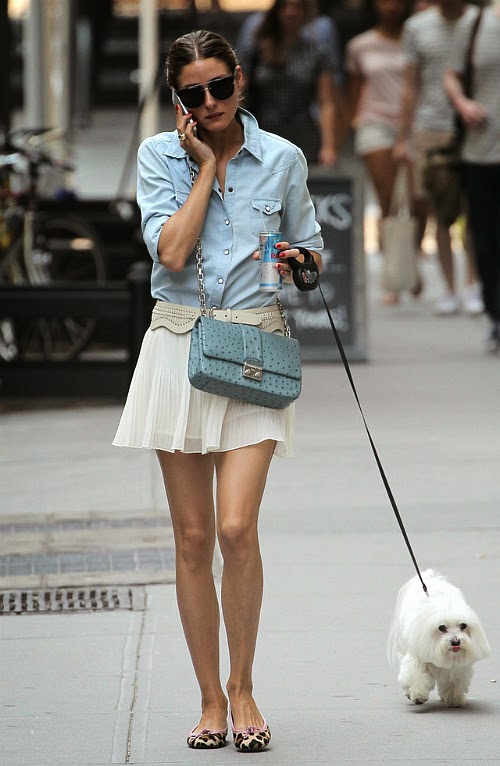 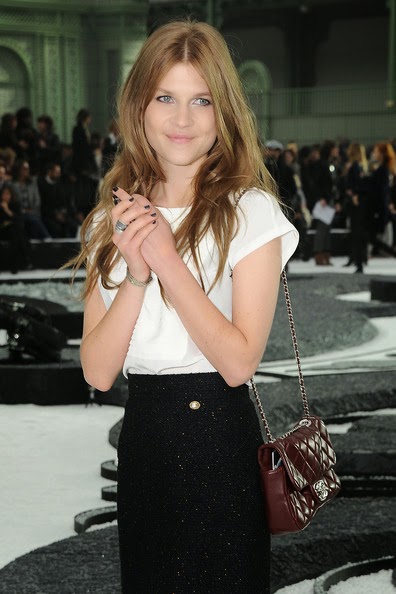 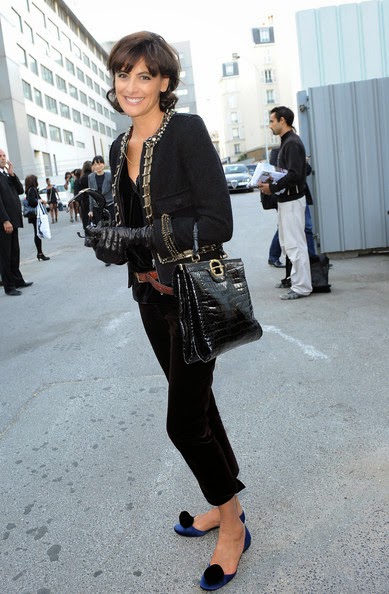 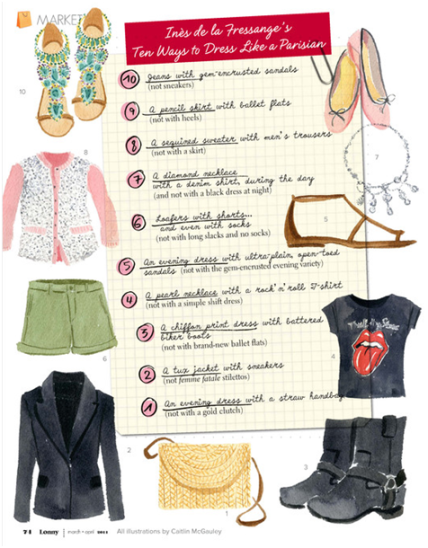 Posted by Alejandro Aguila at 1:57 pm No comments:


From Nell Gwynn to Vivian Ward, the Julia Roberts character in the film Pretty Woman, the figure of the prostitutes has seduced or pitiful the audience along the history.
So, Why one of the oldest profession is still such interesting in fashion, art and films ?

On September 22nd 2015, at the  Musee d'Orsay in Paris I show one of the most interesting exhibition about this subject: "Splendour and Misery", a fascinated collection of important french and foreign artists, who were atracted and  involved in prostitution in the most different ways and artistic techniques.

So, let me show you one of my favourites paintings, collections, films pictures, which were represented the woman as an object of seduction and the fashion as well. 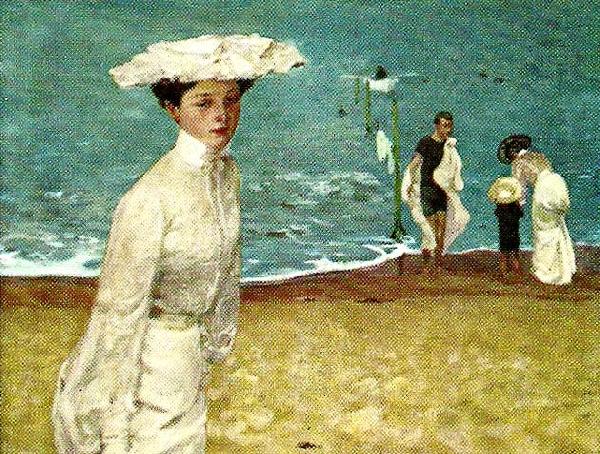 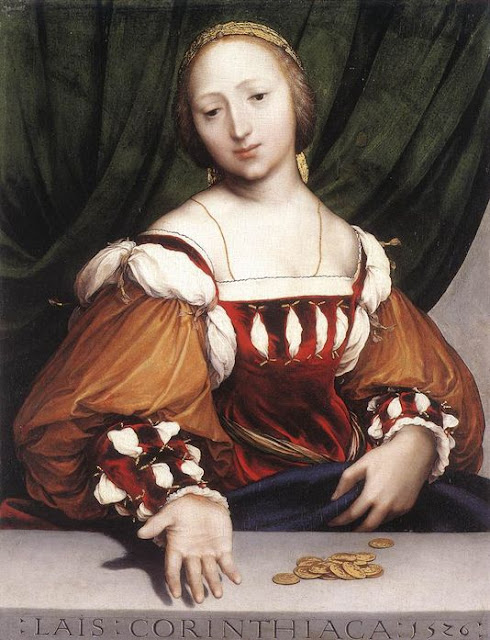 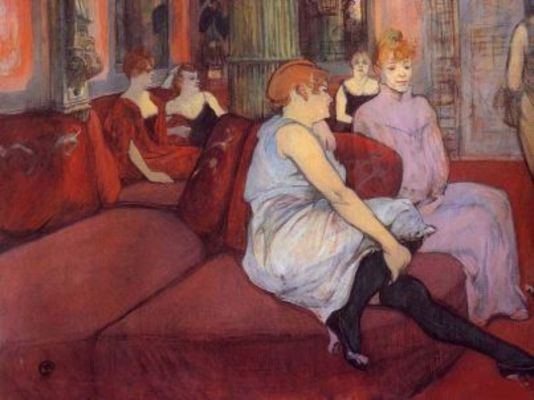 Henri de Toulouse-Lautrec, At the salon of the Rue de Moulins, 1894


Posted by Alejandro Aguila at 8:49 pm No comments:

In 1965 Furs, that women wore, were expensive, beautiful and bourgeois, but really heavy and unpractical. that was the first step for a women to get a social status when their husband bought a fur coat", say Karl Lagerfeld, creative director of Fendi. Mr Lagerfeld had been a modern vision in fashion, when the "sisters Fendi' hired him.

Animal pelts, or fur and leather, have been used by humankind as clothing since the earliest times to protect their bodies from climatic conditions and harm. 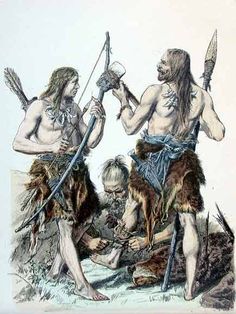 In the last two centuries, the growing middle classes in Western Europe and North America have developed a love for Fashion fur as a way of expressing their social status.
Early French Fashion designers as Jeanne Paquin and Paul Poiret started to use fur regularly in their collections in the early 1900s. 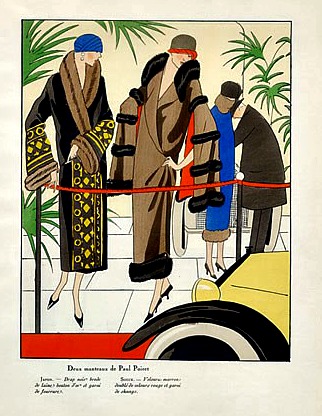 By the 1930s, fur was used in abundance by designers as trim for coats, collars and cuffs. Hollywood has added fur coat at the Red Carpet and TV stars.

Dries Van Noten has been working with Faux Fur since 1990, when it was almost considerated kitsch.

Nowaways, Fur are not a Luxury garment, only for old rich women, and they haven't get older the style.  the new coat are light, colourful, and modern cut. So, Is it posible that Fur coat are a Mainstream?

Last year, the 70% of the collections at the New York fashion Week showed a lot of furs. In fact, this industry runs 40.000 millions of dollars per year and employ 1 million people.

Despite the efforts of anti-fur activists and their sensitizing campaigns associated with animal cruelty, the popularity of wrapping oneself in a “sensual second skin” continues to persist.


Posted by Alejandro Aguila at 12:05 am No comments:

A brief history of the ring.

The use of personal rings was present from the time of the Egyptians, the Incas or the Romans. The rings of these people accustomed to put them engravings of gods and emperors, which served to demonstrate the power of whom wore, and only priests, emperors or consuls were worthy of such privilege.

Rings of various sizes and with various incisions showed the degree of Roman politicians, while rings appearing divinity, were worn by pharaohs and priests as protection, but also as a symbol, given directly to the divine strength, its ability to protect its people and knowing guide.


Rings are the most common and perhaps the most evocative pierces of jewellery. The main sign of love to mark weddings, remember the dead, show a religion faith, a fashion accessory, etc.

Rings were traditionally made from precious metals such as gold and silver, alongside the cheaper alternatives of bronze, iron, or tin. Another options were gemstones, enamels, ivory, and for modern jewellers, plastics, acrylics, etc.

In an age when magic, science and religion were intertwined, a ring could be worn as a sign of faith, as an amulet or to cure illness. The gift of a ring could, as now, signify love or cement social relations.
Some gemstone means a religion and symbolic powers. For example, the Sapphires, they were offen used on episcopal rigs, required to be of gold set with an uncut stone, which were given to bishops at their consecration. Sapphire rings have been discovered in the tombs of several English bishops, including one allegedly found in the grave of William Wytlesey, Archbishop of Canterbury, who died in 1374.

Romantic inscriptions known as posies, often written in french or latin, the languages spoken by educated people across Europe, decorated many medieval rings. 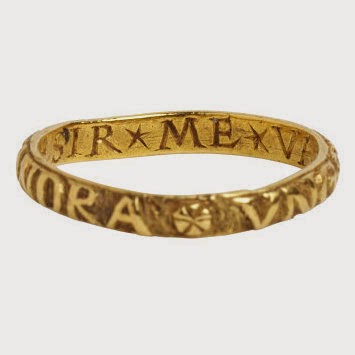 Gold ring, France 1500-30. Outside of hoop inscribed "Ung temps viandra" (A time will come): the inside "mon desir me vaille" (My longing keeps me awake).

In the 18th century the diamond ring became an essencial accesory for the well-dressed gentleman.
The diamond ring appears frequently in contemporary portraits, including in one Johann Christian Bach (1735-82) in which the elegantly dressed composer holds a sheet of music and wears a ring, probable set with a diamond, on his little finger.

In twentieth century brought innovation and diversity in jewellery design. The Arts & Crafts movement begun in Britain in the last decades of the 19thC. Artists rejected industrial manufacturing and its effects on urban life, and looked to the Middle Ages for inspiration, following the design principles of medieval guilds. 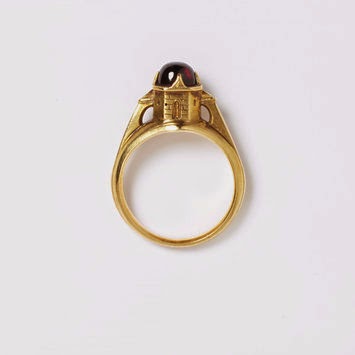 Ring belonged to May Morris, daughter of the socialist, artist and designer William Morris. This ring shows the influence of medieval designs and also traditional Jewish marriage rings.

The art of Egypt, China and India influenced Art Deco jewellers, who brought exotic combinations colours and style.   Arresting colour combinations were also inspire by the stage stage costume that Leon Bakst created for Diaghilev's Ballets Russes, which performed in Paris from 1909.
Some Art Deco Jewellers took inspiration from abstract art and the modernist principles of the Bauhaus School of Germany. 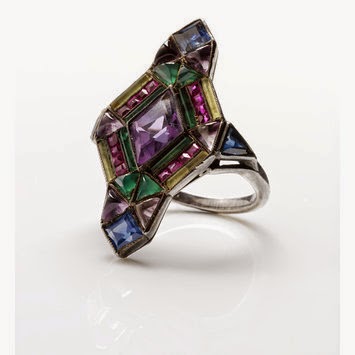 The 1950's and 1960's Europe saw a desire to break with tradition in architecture, sculpture, painting and jewery.
Restrictions on the supply of gold continued in Britain after the war ended in 1945. The post-war optimism of the 1950's gradually spread to the jewellery industry as clients returned to the mayor jewellery house of Europe and America, like Boucheron and Asprey.
Hollywood stars such as Ginger Roger, Liz Taylor or Grace Kelly promoted the fashion wearing Fantastic Jewels in films and their social life.

In the 1970's precious metals were another materials, like acrilic. For instance, Wendy Ramshaw won the Council of Industrial Design awars in 1972 with designs based on geometric forms, and inspired by urban archtecture and the space age.

The first Mademoselle Chanel's jewellery collection was in 1933, that symbolised  the brand's identity. 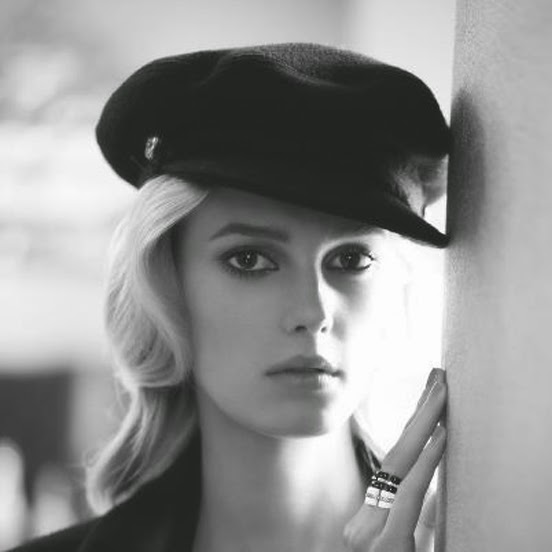 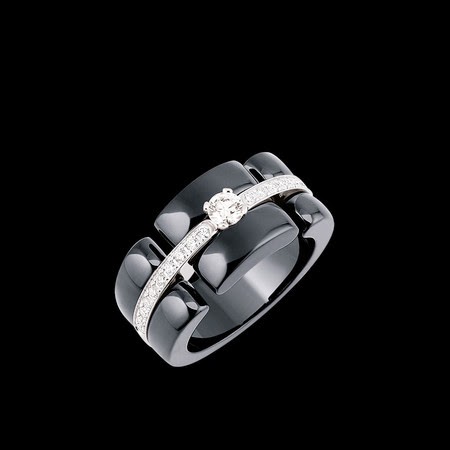 Posted by Alejandro Aguila at 11:52 am No comments: 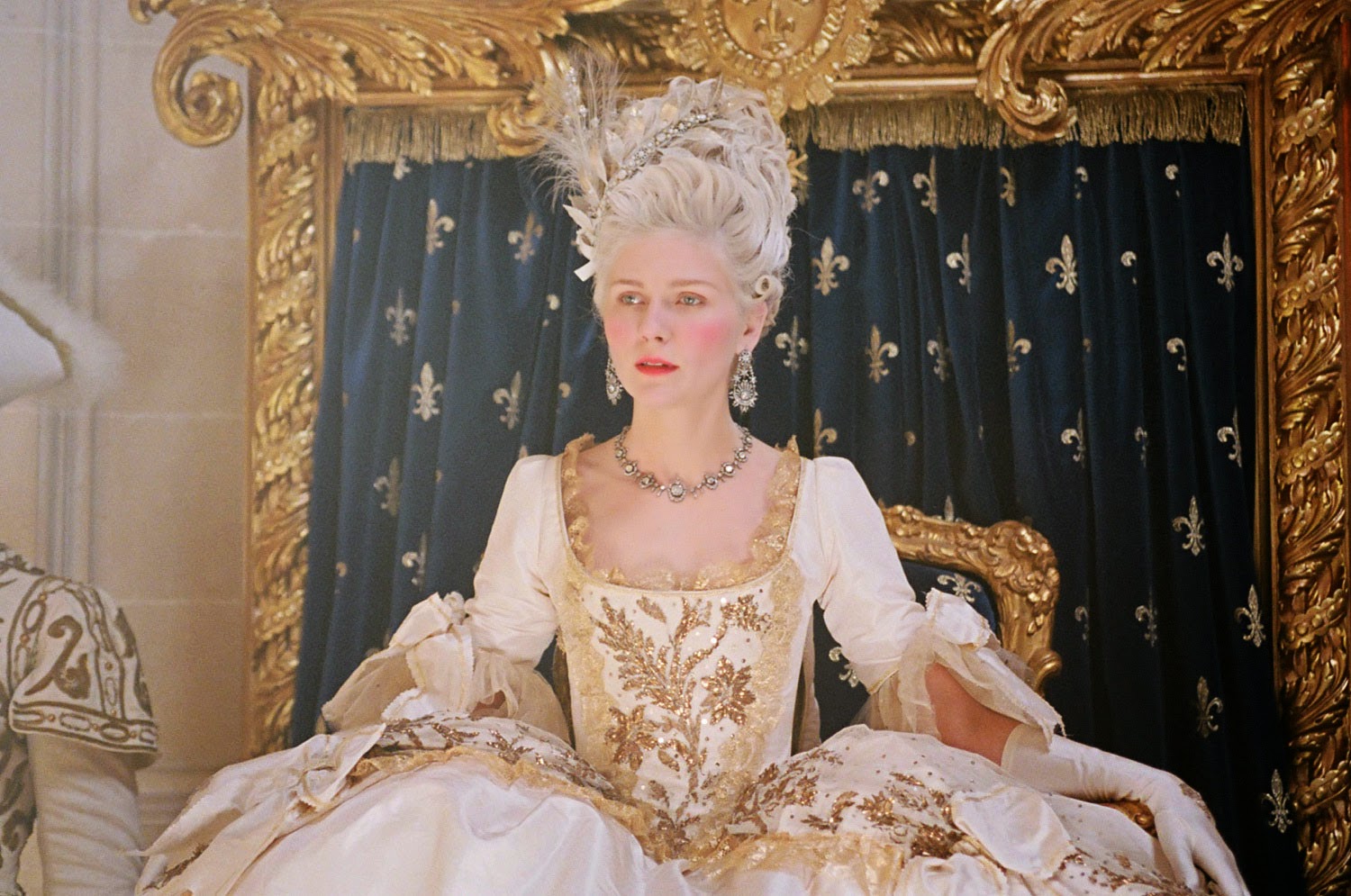 In the 18th century in France, and in wider Europe, one of the most elegant and colourful artistic period was blossoning: The Rococo. The main protagonist in the Rococo was King Louis XV, his Court, and acting as the central theatre, the fantastic Palace of Versailles. Unfortunately, the Queen of France,Marie Leczinska, wasn't in the fashion spotlight, but the super-star in the rococo period was Madame de Pompadour, the mistress of King Louis XIV of France, and the wife of Louis XVI, Marie Antoinette.

In this picture, by Francois Boucher, we can see some details of garments in the french Court. 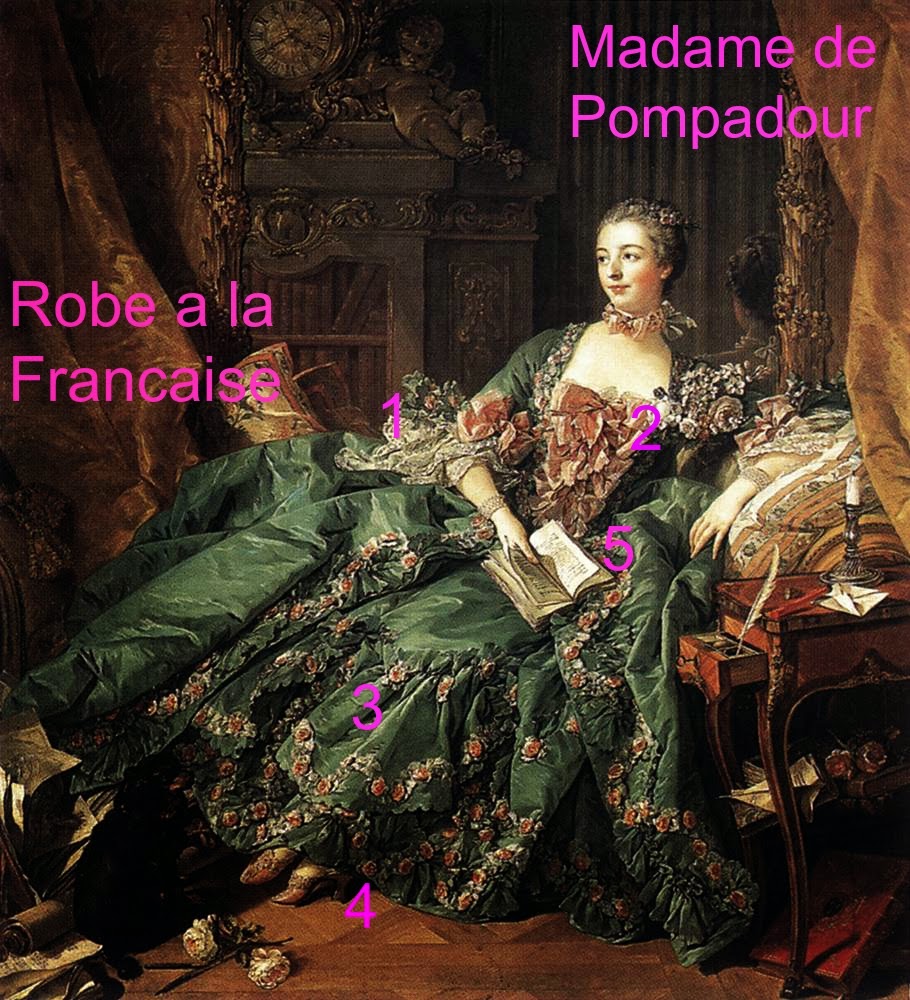 1. Flared sleeves: the sleeves are slim to the elbow, pagoda style, and then flare out at the cuff.
2. A richy embroidered stomacher is attached to the either side of the dress. In this case, the stomacher is laden with knotted ribbon bows that are echoed in the choker.
3. the sink dress is timmed with double-headed pink roses.
4. her open-backed Louis heel slippers are trimmed with pearl beads.
5. wide panniered skirt: Pannier or "basket" petticoats could create a voluminous rounded skirt.

This Dress, a la francaise, that Madame de pompadour is wearing demostrates her position in the high society of France and the royal court.
France led the way in the luxury trade in that time. For example, Lyon was the principal centre of silk weaving and embroidery, while Paris became the centre of haberdashery, accessories and innovative drapery.
Lots of boutiques of the marchandes de modes (fashion merchants), jewellers and miliners were set up in Rue du Faubourg Saint-Honore and Rue de la Paix (nowadays, an area of luxury brands).

Haut-Couture has stolen the french court in many ocations and different designers. 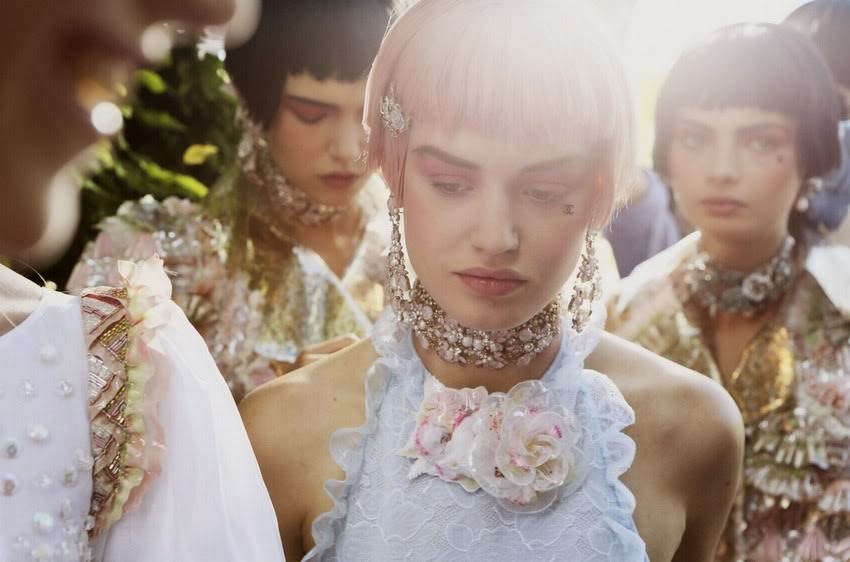 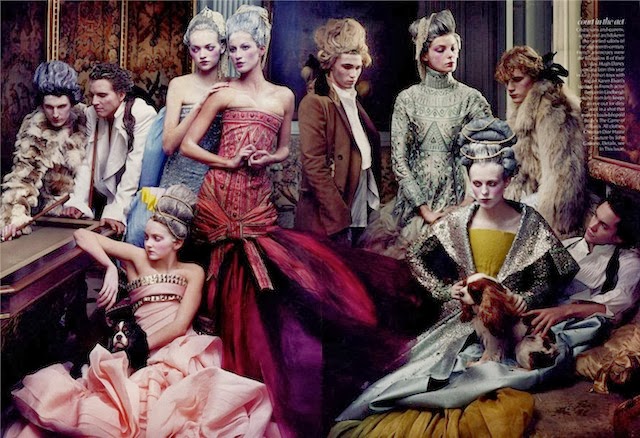 The fashion for outsize hairstyles and headdresses was first set by Marie Antoinette, but it was taken to extremes by her courtiers.
Critics spoke of such hairstyles as dirty, accusing their wearers of harbouring nests of fleas.

The model of the ship (picture on the right) featured in the headdress, La Belle Poule, was well-known for its victory against the British frigate Arethusa in 1778, which began french nvolvement in the american War of Independence. 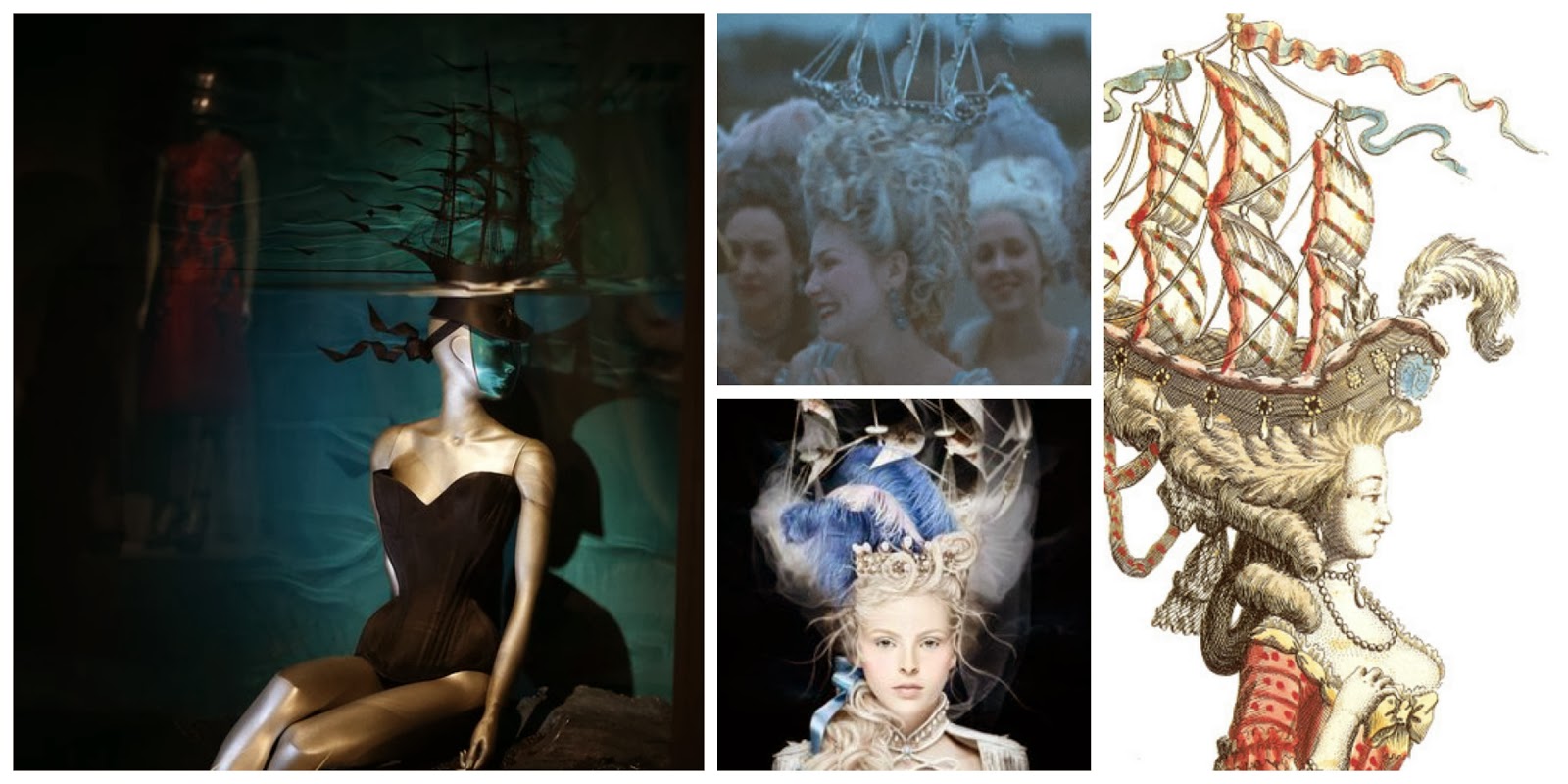 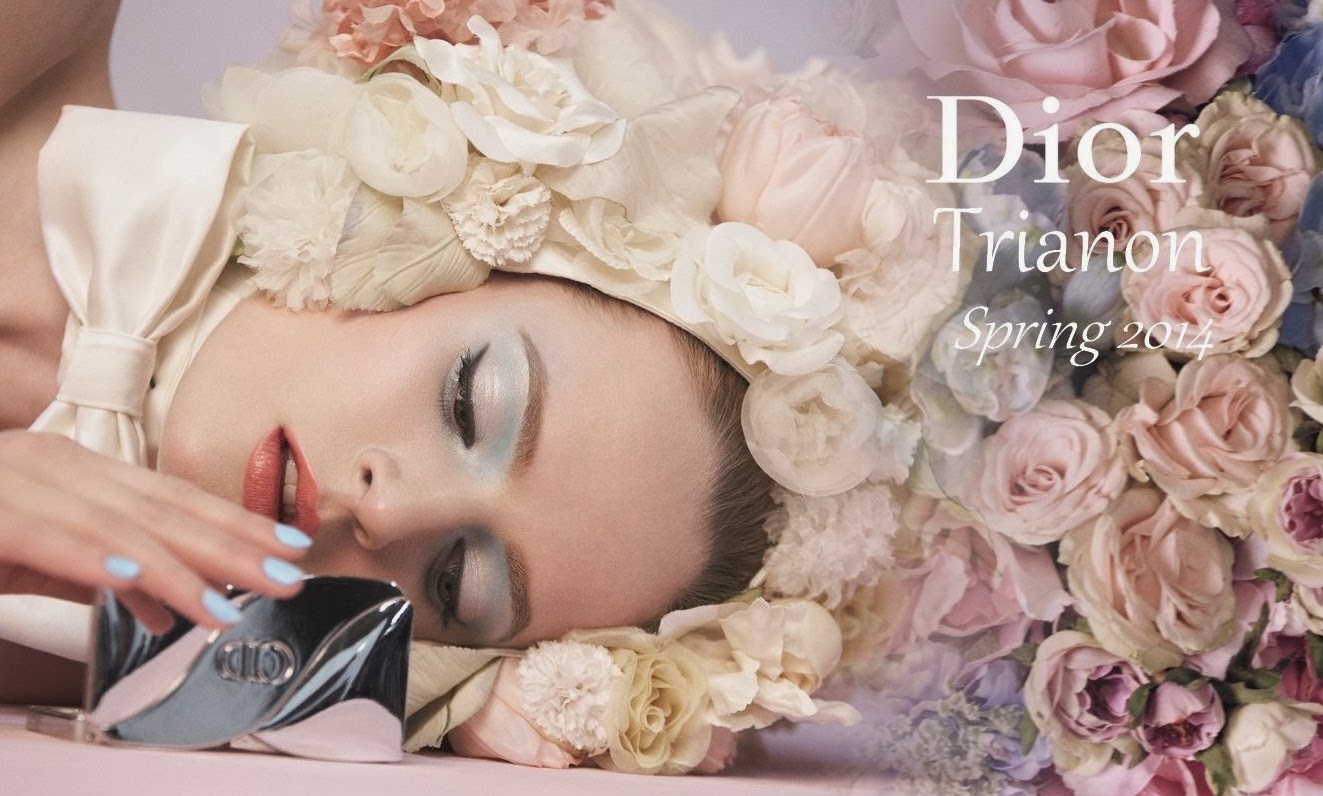 Posted by Alejandro Aguila at 9:43 am No comments: